The South Crofty Project was completed during 2013/2014. It was for the refurbishment of the existing winding house, pumping house and the large headframe.

What is the Project?

The project is to refurbish the New Cooks Kitchen headframe on Dudnance Lane, Pool, and the two Grade II Listed engine houses at Chapple’s Shaft is being carried out as part of the agreement with mine owners Western United Mines to enable new development and regeneration to go ahead in the area. CORMAC Contracting Ltd have been appointed to employ us to erect scaffolding around the headframe which is in a poor state of repair. Refurbishment including grit blasting, repainting and replacement of some steelwork was then carried out. The engine houses have also been re-pointed, and the masonry made safe, using traditional conservation skills and materials. 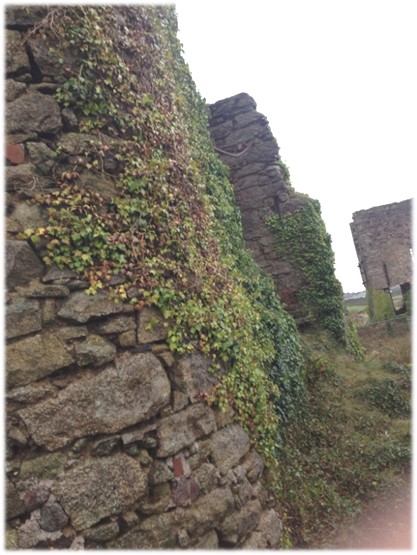 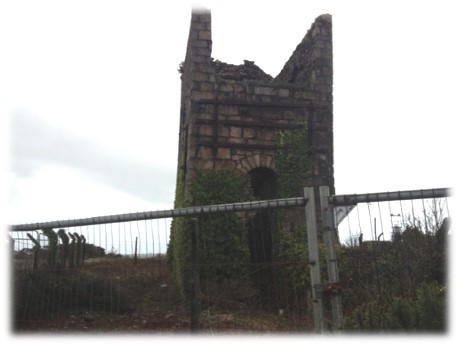 Pictures of the site before any work was done. 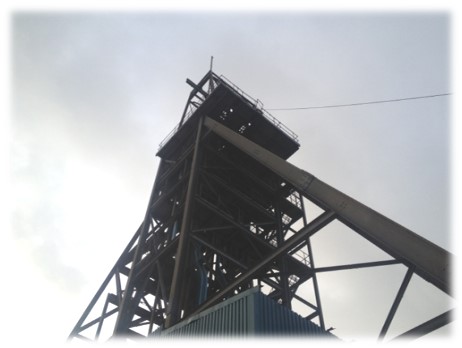 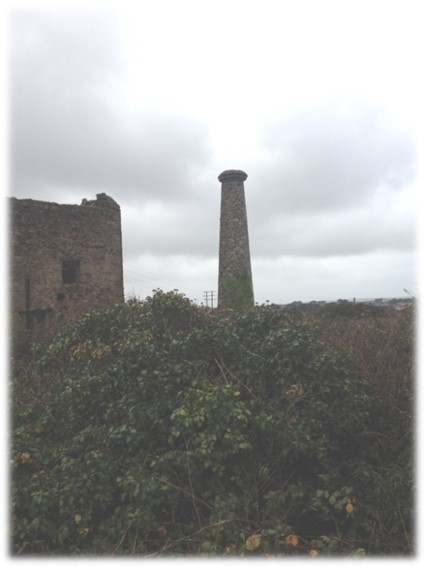 The Scaffolding - The Headframe

The headframe is not a Listed building but is recorded as a building of local interest on the Cornwall & Isles of Scilly Historic Environment Record.  It was built in the 1950s and modified in the 1970s. It is no longer used for winding men or materials up from the mine shaft.  It has a unique shape because it’s formed from two winders operating skips or cages in the same shaft, with a lifting frame on top in order to winch the sheave wheels into place.

The scaffolding comprises of a UBIX temporary roof erected over the headframe totalling 1246m2 for the main external slops then a further 1884m2 of New Combisafe vertical sheeting  which we are one of the first companies to use this.  The sheeting was cut to size on site to ensure the scaffold was suitable for the works.  The main scaffold was16 lifts high then the roof was added to the top.   In addition to this we scaffold we completed internals scaffolds to the headframe for blasting.

We used the plettac contor system scaffolding which we feel improves the standard of the scaffold.  Due to this being a metric systems this made basing out a lot easier than imperial system scaffolding.  We used over 9000 system components; 20000 fittings; 3300 tube and 8000 boards on the headframe alone. 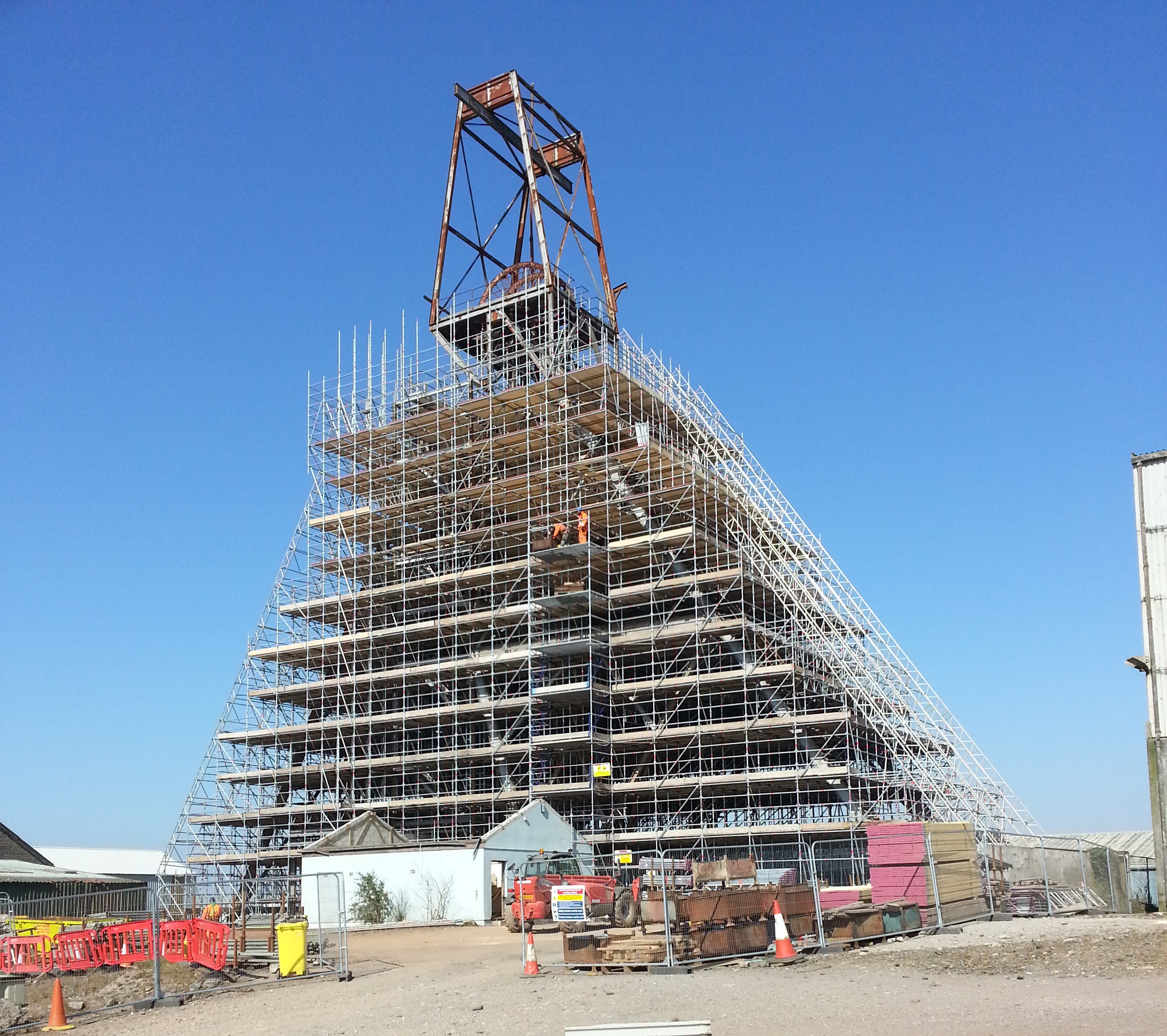 After 4 weeks of work 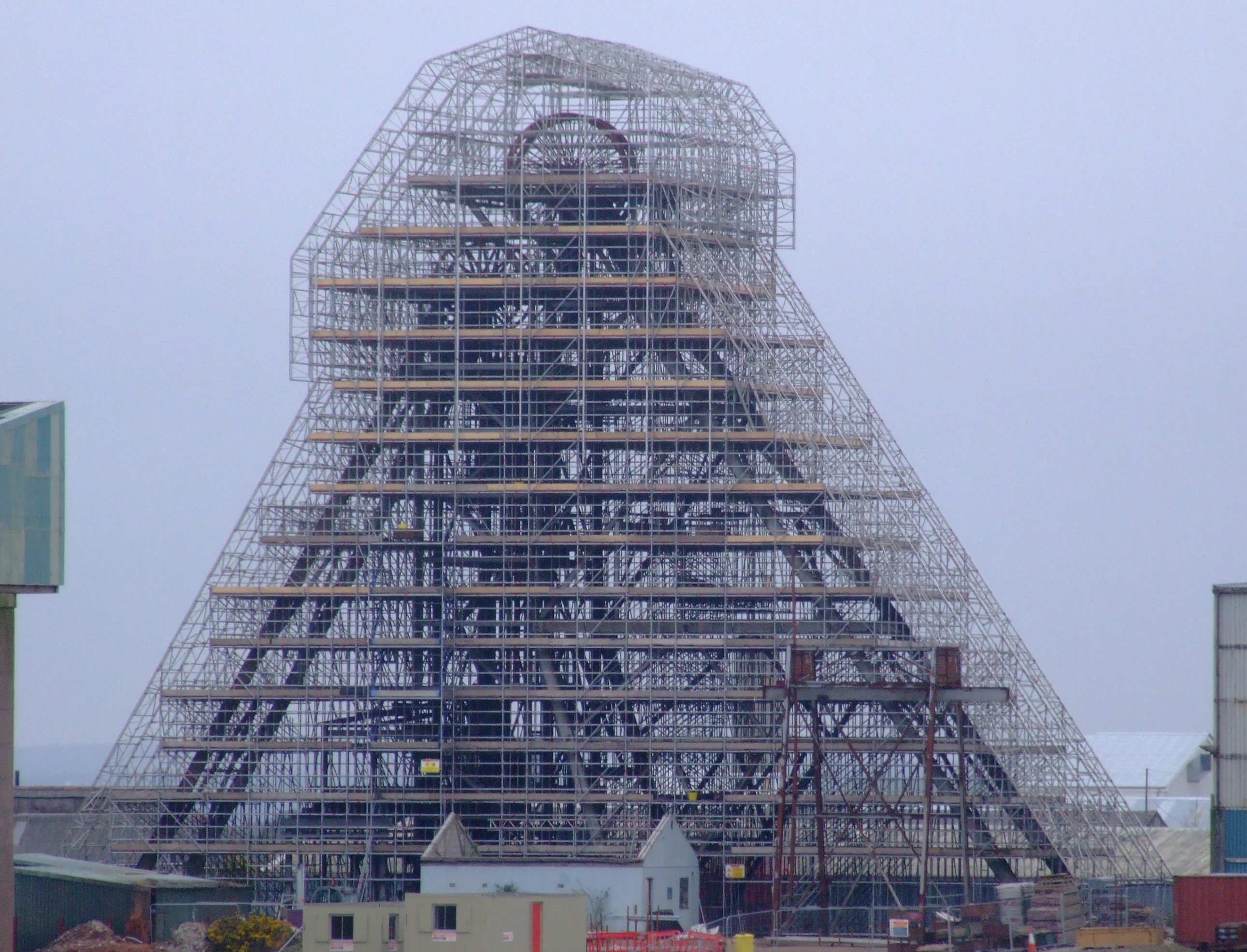 After 6 weeks of work

Photos of the Headframe outside 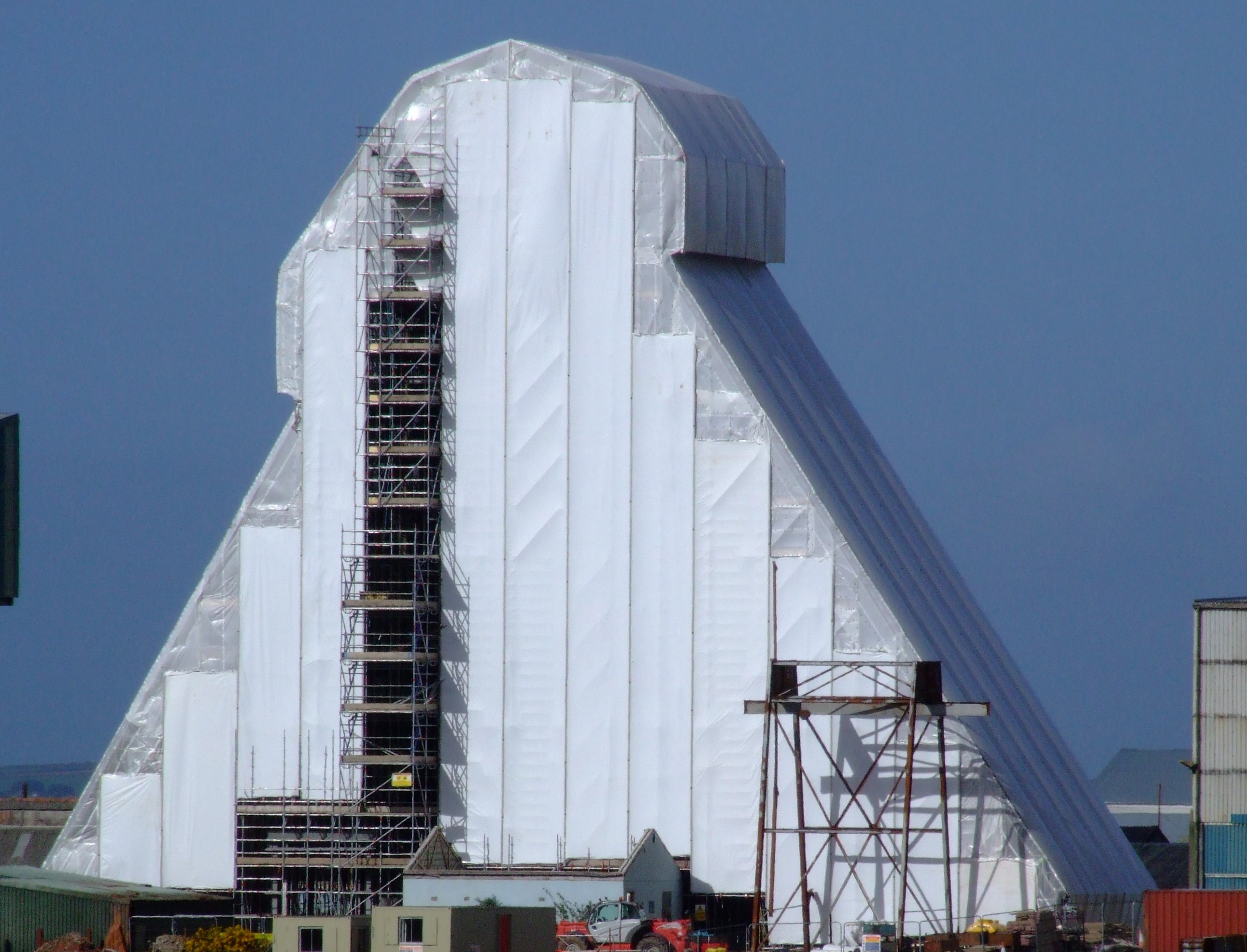 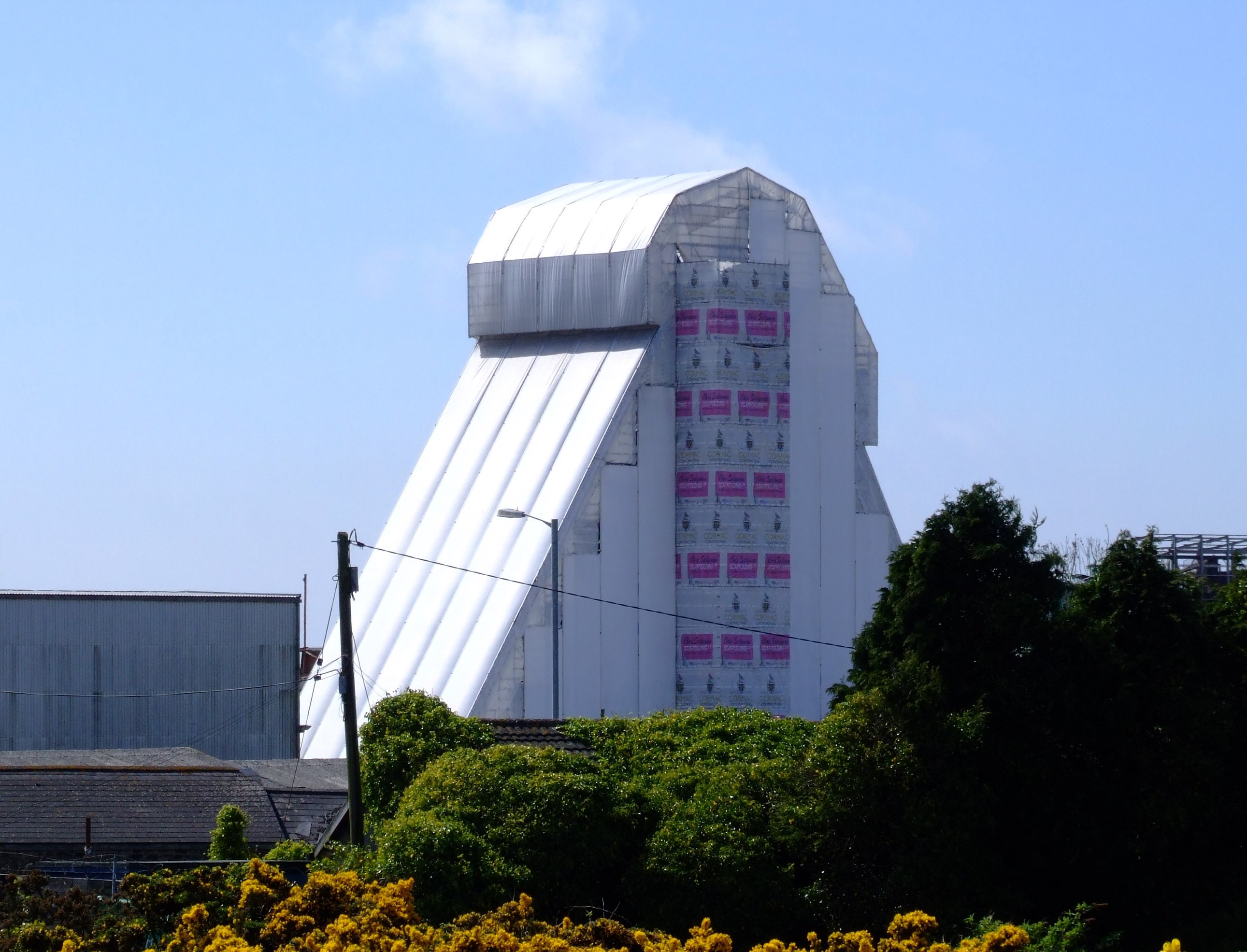 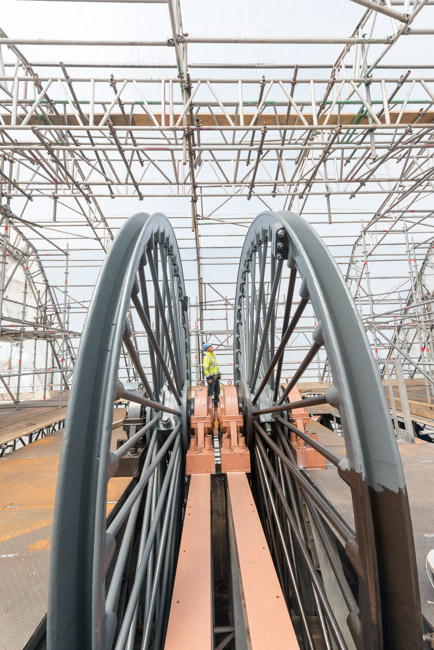 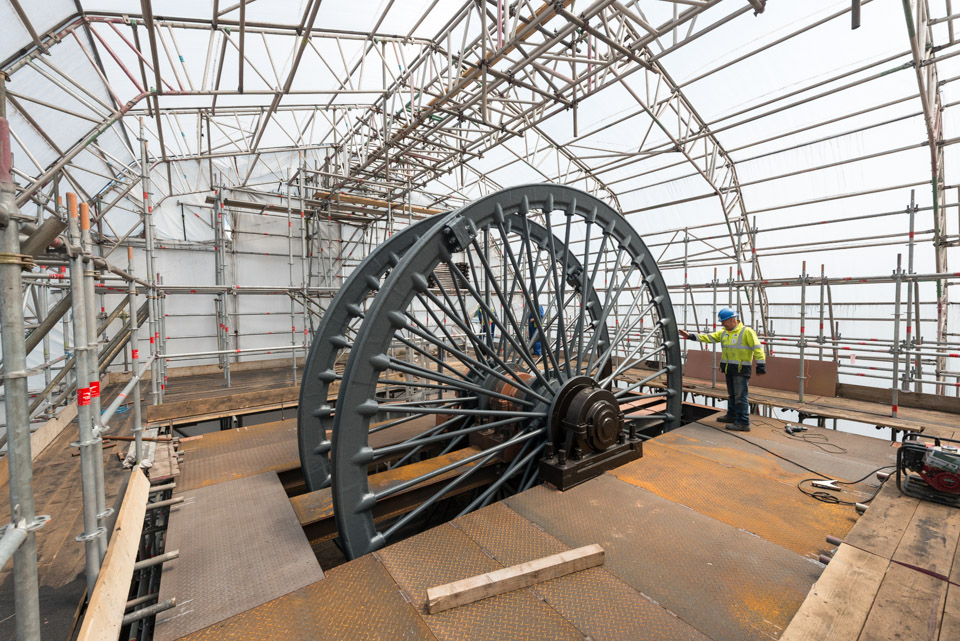 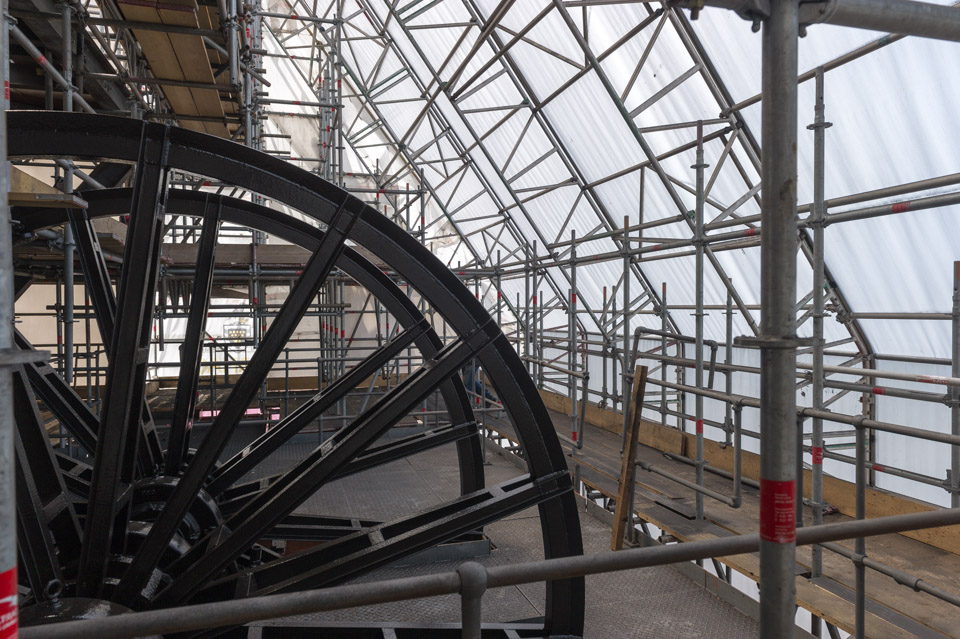